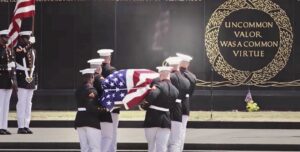 “Our flag does not fly because the wind moves it.
It flies with the last breath of each soldier who died protecting it.”

A recent article in the Washington Post carried the following headline, “The Coronavirus Death Toll Just Surpassed Vietnam: Here’s Why that Comparison is Fraught.” The author provides a chart showing the number of American soldiers who died in conflict, beginning with the American Revolution and ending with Post-9/11 conflicts.  The data reveals that in a period of three months, the COVID-19 virus has taken more lives than American killed in the Vietnamese War.  What bothered me beyond comparing deaths from a virus to those who gave their lives for this country, was the author’s audacity to state, “The main problem with the comparison between the coronavirus death toll and various armed conflicts is that those conflicts were, depending upon your perspective, elective events.”  Have you ever heard of comparing apples to apples?  Why not make comparisons to the numbers who have died of diseases like cancer or illnesses like influenza?  Elective events?  Really????  Tell that to the families of those who died serving their country.

This year Memorial Day parades and cemetery ceremonies have been canceled.  In PA the company that manufactures flags for veterans’ gravesites applied for “Essential Business” status and was denied. Last Monday it received a last minute reprieve that permitted it to ship the 400,000 flags ordered by 24 PA counties. It would seem that our current Pandemic and a subsequent preoccupation with “returning to normal” has permitted many to lose focus on the true meaning of this day.

The following is an excerpt from a “Memorial Day Tribute and Thank You” made by President Ronald Reagan at Arlington National Cemetery in 1985.  I encourage you to listen, watch and read along.

“Sometime back I received in the name of our country the bodies of four marines who had died while on active duty.  I said then that there is a special sadness that accompanies the death of a serviceman, for we’re never, quite good enough to them–not really; we can’t be, because what they gave us is beyond our powers to repay.  And so, when a serviceman dies, it’s a tear in the fabric, a break in the whole, and all we can do is, remember.

It is, in a way, an odd thing to honor those who died in defense of our country, in defense of us, in wars far away.  The imagination plays a trick.  We see these soldiers in our mind as old and wise.  We see them as something like the Founding Fathers, grave and gray haired.  But most of them were boys when they died, and they gave up two lives — the one they were living and the one they would have lived.  When they died, they gave up their chance to be husbands and fathers and grandfathers.  They gave up their chance to be revered old men.  They gave up everything, for our country, for us. We owe them a debt we can never repay.  All we can do is remember them, what they did, and why they had to be brave for us.

Regardless of what is happening in our world, let us never forget to take a moment and say a prayer of thanks for those who gave their lives so that we may enjoy our freedom today!