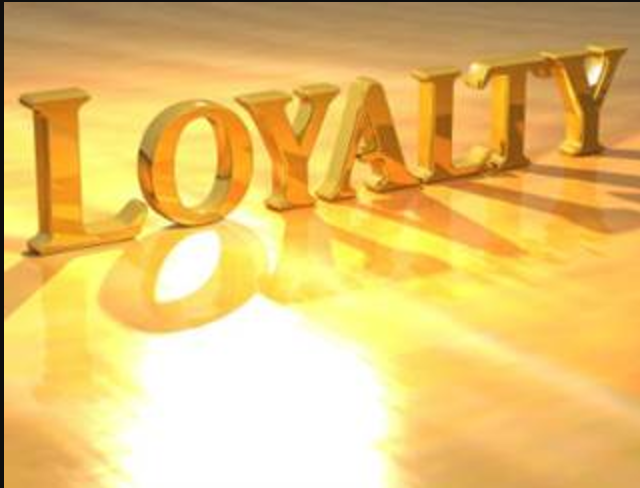 Let’s examine what I would like to refer to as the word of the week, LOYALTY!  It goes without question that this is a trait important and valued by all.  Leaders and employers want the loyalty of those who follow or work for them.  Business owners hope to establish a loyal clientele.  Pastors hope they will have a loyal congregation and we all hope for loyal friends and family.
So why the sudden interest in loyalty? Most would attribute it to events that have transpired in Washington over the past two weeks. Our President, like any other leader, wants to be assured that those on his team are loyal (“Loyalty is extremely important to me. My family and close friends will say I am loyal to a fault.”)  But what does it mean to be loyal?
Miriam-Webster defines LOYAL as, “having or showing complete and constant support for someone or something, being unswerving in allegiance:
So, how does this loyalty idea play out on a daily basis?
Coach John Wooden is considered by many to be one of the most successful coaches in history.  He was renown for his loyalty to his players and likewise his players were noted for their loyalty to their coach and each other.  The John Maxwell Company examines this, “Commitment to Loyalty” in their post,“ Loyalty: The Key to Consistent Victory . Likewise, in his book, “Wooden on Leadership” Coach shares,
“Loyalty is part of our higher nature and it is also part of the nature of leaders who achieve higher goals.
The power of Loyalty is the reason I placed it in the center of the Pyramid’s foundation.
A leader who has Loyalty is the leader whose team I wish to be a part of. This is true almost everywhere.
Most people, the overwhelming majority of us, wish to be in an organization or part of a team whose leadership cares about them, provides fairness and respect, dignity and consideration.
Loyalty from the top inspires Loyalty from below. It is a most precious and powerful commodity and it starts with the leader.”
So how does this transfer to the work setting today?  Shawn Murphy considers this in his INC.com post, “Employee Loyalty is Not Dead”.  He begins with a powerful statement, “Loyalty means leaving when you are no longer motivated!”  The article examines what Murphy refers to as a 21st Century perspective on employee loyalty.  He identifies three elements that serve as the basis for this new perspective.
As the nature of work changes, so does the relationship between employer and employee.  I had the opportunity to work for one organization for 37 years.  Was I loyal?  The joke was I bled maroon and gold!  I viewed those with whom I worked as family.  Strong deep relationships developed and continue today.  With rare exception, those days are gone.  The Indian HR Associates post entitled, “Rebuilding Trust:  Employer-Employee Relationship” examines the new model to rebuild a relationship that was once based on longevity.  Recognizing that employees are now viewed as free agents, the authors encourage the development of an Employer-Employee Alliance, where both sides invest in each other.  Personally, I still like family!
I imagine we will hear a great deal more about loyalty this week.  Maybe those in Washington D.C.would do well to consider the words or Mark Twain, “Loyalty to Country always, to the Government when it has been earned!”
Have a great week and  Embrace the Challenge,