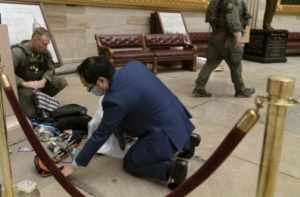 “You can’t fix something,

by breaking something else!”

In the early morning hours of January 7, Congressman Andy Kim (NJ) was making his way back to the House Chamber when he found himself in the desecrated shambles of the Capitol Rotunda.  As he surveyed the landscape he saw garbage and debris, empty water bottles, cigarette butts that had been put out on statues, shattered glass, smashed furniture, and Trump banners littering the floor.  In the middle of it laid an American flag.  Nearby he noticed police officers discarding empty pizza boxes into plastic trash bags.  He asked for a  bag, and over the next few hours assisted in cleaning the building, which only hours earlier, had held him hostage.

A few days later the AP photo of the lone congressman cleaning the capitol went viral.  Harry Smith of the NBC Today Show interviewed Congressman Kim this past Monday morning.   In explaining his actions the Congressman said,  “I tried to do as much as I could.  I didn’t want the sun to rise the next morning on a broken Congress and a Capitol building left in that condition.  When you see something you love that’s broken you want to fix it.”  That phrase stuck with me this past week.

Our nation is literally sick and while its spirit has not been broken, it is being tested like never before.  For almost a year we have battled a Pandemic that has claimed the lives of over 390,000 of our countrymen.  This past summer we witnessed violence, riots and mayhem that served to remind us that inequity and inequality still exist in a nation that was founded on the words, “We hold these Truths to be self-evident, that all Men are created equal.”  And last, but not least, we permitted the election of a President to drive a wedge between many who, at one time, began their day together saying, “I pledge allegiance to the flag of the United States of America, and to the republic for which it stands, one nation under God, indivisible, with liberty and justice for all.”

“When you see something you love broken, you want to fix it.”  The challenge we face is how?  It begins by embracing the self-evident truth that all are created equal.  It begins by looking to the future and learning from our past.  It begins by embracing that which brings us together and respecting that which contributes to making us unique.  It begins with each of us committing to fixing something we love, and remembering that, “Even quiet actions can be the ones that, somehow, sometimes, make the strongest arguments and the strongest points.”

One year from now I hope and pray each of us can look back from better times and say, “I tried to do as much as I could!”