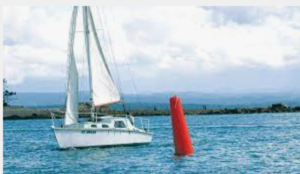 “Life presents us with many choices,
the ones we make reflect our values.”

When you leave the marina in Havre de Grace, MD and set sail for the waters of the Northern Chesapeake you follow a series of channel buoys that lead to Turkey Point, where you tack starboard and head south.  As you sail, the red and green buoys provide information that is designed to help you safely reach open water.  In addition to marking the sides of a navigable channel, helping to avoid sand bars and other hazards, these buoys can also identify restricted areas, show the safe side to pass a hazard, and on wide bodies of water, mark the safe centerline. While sailing one morning, I remember thinking that we have something similar in our daily lives, life buoys if you will, that serve to guide us through the hazardous waters we all occasionally encounter in our careers, pursuits and personal lives.  The biggest difference is they are not red or green, and they do not float on the surface; rather, they guide us from within and they are called core values.

These values are the fundamental beliefs that guide the decisions, behavior and direction of a person, and by extension an organization.  They serve as guiding principles and often become the basis for differentiating between right and wrong.  Core values are never compromised, either for convenience or short-term economic gain, and like the buoy, they serve to define the channel that enables individuals and organizations to stay on the right path.  But sometimes it’s about more than being on the right path; it’s about taking a stand and being willing to call out those whose behaviors and/or actions violate basic ethical standards.  It’s about having a “Conscience Code”.

G. Richard Shell is a professor of Business Ethics at the Wharton School of the University of PA.  Recently he led the redesign of Wharton’s MBA program and helped create its required “Responsibility in Business” course which inspired his most recent book, The Conscience Code.  He shares, “We live in a world where all too often good people are put in bad situations, or they navigate to bad situations without knowing quite how they got there.”  The book essentially serves as a blueprint for value-based conduct in a world that has, until recently, come to accept unethical behavior as part of the status quo.  As a result, Shell firmly asserts that adopting a “conscience code” of ethical behavior is not only morally right, but also more profitable than the alternative.  The book develops 10 rules that readers can use as guidelines to combat these pressures, but for the purposes of this post, I’m going to only share the first and second rules.  Hopefully you will be intrigued enough to follow-up and discover the other eight yourself.

Ironically, this morning’s sermon at Church addressed Rule #1; Turn Toward, Rather than Away from Conflict.  It’s not easy.  Think about those, who over the years, have confronted significant issues that were broadly accepted, but wrong; Jesus Christ, the Dalai Lama, Susan B. Anthony, Martin Luther King, Rosa Parks, César Chávez, Malala Yousafzai, Oskar Schindler, and Nelson Mandela to name a few.  Each of these individuals addressed situations, often at great personal risk, that countless others had ignored or accepted.  Navigating the channel means challenging those who, through their words or actions, would compromise generally accepted values for personal or organizational gain.  This leads us to Rule #2; Commit to Your Values and be Prepared to Speak-up for Them.

Remember, values are the fundamental beliefs that guide the decisions, behavior and direction of a person, and by extension an organization.  While an infinite number influence our personal, civic and professional lives, research suggests there are five that spark the greatest conflict because they often reflect core beliefs about how the world should work.

According to Shell, these five values (CRAFT) provide us with the reasons to think through the conflict with which we are faced, but it will be our emotions that will most accurately predict our actions as we turn toward the conflict.

I can get angry when someone cancels an appointment at the last minute.  I can feel guilty if I forget to get that birthday card out on time, and I can feel ashamed when I eat that raisin sticky bun before going to bed.  Those same feelings can also act as powerful motivators when we need to stand up for something we believe in:

Take a moment to reflect about a time when you faced an important challenge to your personal values.  What did it take to get you moving?  Was it the sense of guilt or shame that comes with doing nothing,?  Was it the possible prospect of feeling fulfilled by actions that represent a values driven life, or was it something else?  Whatever it was remember it as it a valuable tool you will need again.

It doesn’t matter where we are in our journey.  We will all face situations that make our personal navigation challenging.  Likewise we will most likely witness other ships that have plotted a course that we know is wrong.  The question becomes twofold, will we sit back and watch, knowing what we see is unacceptable, or will we be motivated to become a voice and a tool that works for the greater good?  That is a challenge with which we will all be faced; how will you embrace it?