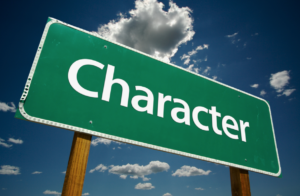 Be careful of your words, for your words become your deeds;

Be careful of your deeds, for your deeds become your habits;

America is facing a crisis of courage!  I’m not talking about physical courage, that which can be developed through training and experience.  I’m talking about moral courage!  That which is an inherent part of our character.  That which inspires us to stand and take a position, even when it might not serve us personally, but certainly serves to foster the greater good.  That which sets the example for our children and grandchildren; lest we forget, they are watching.

What character lessons are our children learning through the news and social media’s coverage of national politics and other critical issues?  What lessons do our children learn when character issues go unaddressed by those in a position to challenge them?  Writing in The Atlantic, Eliot A. Cohen shares, “The American crisis is, at its root, a crisis of character.  Yes, many other forces and phenomena are in play………but it is character that remains the issue that confronts us in almost every story about national politics that one encounters daily.”

What is “Character”?  Merriam-Webster defines it as, “The aggregate of moral qualities by which a person is judged apart from intelligence, competence, or special talents.”  General (Ret.) Norman Schwarzkopf shared, “Character is what you do when no one is watching.”  John F. Kennedy, in considering the character trait of “Courage” wrote, “A man does what he must – in spite of personal consequences, in spite of obstacles and dangers and pressures – and that is the basis of all human morality.”

Two weeks ago I had the opportunity to listen as a father described his simple, yet effective approach to helping his children develop the type of character which, in the long run, will serve them and the greater good.  As we sat late into the evening following a round of golf, our conversation touched on many topics; business, politics, sports, and the challenges of raising children and preparing them for tomorrow’s world . It was our discussion of character development, and the manner in which Steve is approaching it with his children that stuck with me.  He and his wife have been blessed with four children, one of which is entering his teen years.  I was immediately impressed with Steve’s recognition that character development is the foundation to a successful life.  Hence, his understanding of the need to share character development lessons with his children  I found Steve’s use of the “Nugget” approach especially interesting. Following a game or practice, during the ride to school or even during one of those rare one-on-one opportunities, he shares a “Character Nugget”.  It might be a quick discussion on the importance of honesty, moral courage, standing up for someone unable to stand for themselves, or simply paying it forward. The “lessons” are simply a part of the parent-child discussion.  Does it work?  I could see the pride when he shared a story of a circumstance in which his oldest son demonstrated one of those lessons and then turned to his father and said, “You were right Dad!”

So here’s the challenge I would like you to embrace this week.  Think about the “Character Nuggets” shared with you by a parent, grandparent or some other important person in your life. There were probably many, but what two or three come immediately to mind? I’d be interested in hearing about them and how the “character lesson” was delivered.  Have a great week, share some “nuggets”, and Embrace the Challenge!