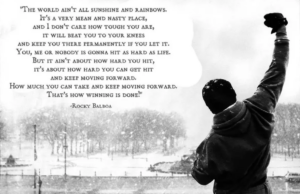 Resiliency and Grit are learned behaviors that enable us to not only survive, but thrive in the face of adversity.  This is your 10th of 14 daily messages, each containing an exercise designed to strengthen your development of these two key skills.  Keep a journal, record your reflections and chronicle your growth.

Have you encountered this situation?  A meeting is convened to consider an issue that is compromising progress.  The person leading the meeting reviews the problem and says, “Any ideas?”  There is a moment of silence until one person steps up and offers a constructive solution.  There is no praise, rather the next ten minutes are spent dissecting and criticizing the idea. Anyone else want to volunteer a solution?

Criticism can sting in any situation, whether or not it has merit.  While some people are able to consider and integrate helpful criticism and experience no lasting effect from it, others find it more difficult to accept and digest.  In fact criticism can lead to extreme defensiveness and/or negative affect (typically, anxiety, depression, anger, and shame).

While it may not be possible to avoid being criticized by people in life, one can learn to react and respond in more helpful and less damaging ways. One such way is to adopt a growth mindset, which means approaching the criticism as an opportunity for personal growth and learning (Dweck, 2008).

For some there is a tendency to be oversensitive to criticism.  Today’s exercise is designed to explore how to reframe the experience of criticism as an opportunity for growth and learning.  In doing so we can learn to view criticism as a means of improvement rather than a means to self-criticism and negative affect.

Next time one of your contributions or ideas is criticized, remember the words of Norman Vincent Peale, “The trouble with most of us is that we’d rather be ruined by praise than saved by criticism.”  Grab the life preserver and