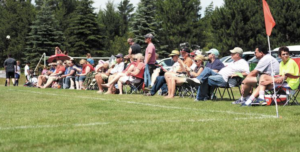 “The afternoon of life is just as full of meaning as the morning; only its meaning and purpose are different.”– C. Jung

He turned 41 Friday.  He’s now officially, “middle aged”!  What does that make me?  I can remember the morning as if it was yesterday. I kissed my wife goodbye and said, “Take care and call me if anything happens.” I arrived at the office and my secretary greeted me saying, “How’s she doing?” I smiled and said, “Any day now!” An hour or so into the day I stepped out of the office, only to return a few moments later and be told, “Go home, her water broke.” I went to my desk to quickly check a few things and was quickly reprimanded, “I said you need to go home, whatever is on your desk will still be there when you come back!” Mrs. Stauffer was not one to mince words. A quick ten minute drive got me home to find my wife in the shower. She said, “I’m fine, I will be ready in a few minutes.” Shortly thereafter we arrived at the hospital and within a few hours our son was born.

I was a father now; I was Chad’s “Old Man”. He never used that term, but I’m certain a few of his friends and in later years coaches, referred to me in that manner. Suddenly my identity was changing, I was no longer just the Assistant HS Principal or a husband, I was now a father, Dad, Chad’s Old Man. The years flew by quickly, and  I’m not sure where they went! Weekends were filled with birthday parties, gatherings with family and friends, and sporting events. Suddenly he was in high school, asking his study hall proctor if he could go across the street to the Ed Center to “talk to my Dad”, but first hitting Dunkin’ Donuts to grab a coffee and donut for the “Old Man”. Graduation was difficult; we had spent the past twelve years going to school together, and he would soon be off to college. I had gotten accustomed to people saying, “Oh, your Chad’s dad!” I was going to lose that identity and I wasn’t a happy camper.

College reinforced the father’s identity through his son. I think this is the case for most parents. We were often introduced to each other or opened our introductions through our children, “Oh, your Christian’s dad, nice to meet you, I’m Chad’s father. As Chad got older and established his own identity, I found myself reveling in his accomplishments; I was proud to be Chad’s “Old Man”. Graduation came quickly and the lights of the big city drew Chad, many of his classmates and Laura, his future bride, to, “The City That Never Sleeps”. Within what seemed like a few short years there would be a wedding, varied residences, and the emergence of a new Wolf pack; one with pups named Grace, Luke and Scarlett. Chad’s mom and dad had taken on the identities of Mimi and Papa, and were enjoying every minute of it.

As people age, they begin to struggle with their identity. Our sense of self is deeply intertwined with something that is in constant change; our age. The fact is, we will all reach a point where we must adapt to the physical, financial and professional changes occurring in our lives. For many this occurs at retirement or at that time when our “positionality” changes; when we no longer identify as the worker, provider or protector. What is important to remember however, is that these “changes” in identity are part of the human condition; our identities are not set in stone, they change as we change.

The Wolf pups are getting older; Grace is playing lacrosse, Luke is playing tee ball and Scarlett just enjoys running around the fields. Just as I did with my son, I’m looking forward to the opportunity of standing on the sidelines and cheering for my grandchildren. Perhaps one afternoon as I stand with my son and watch, one of the pup’s coaches will turn to someone and say, “Look, there’s Wolf’s old man’s old man.” That’s an identity I will embrace forever!