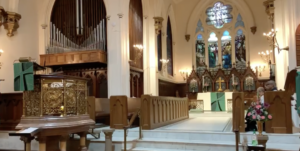 “The search for something
can prove as interesting as finding it.”

We knew it would be a process requiring significant investment of time, dedication and effort.  Leadership of this initiative would require patience, insight, and people skills, and those on the team would need to embrace a collaborative mindset that encouraged open discussion, constructive disagreement and eventual consensus.  It could be said that the continued existence of the organization and its ability to make viable contributions to the community rested on the outcome of this process.  It took a little over a year for the fruits of their labor to be realized; the search has ended and we have found our new rector!

For the most part I had a side-line view of this process, as our search committee worked independently and confidentially.  My role as Senior Warden (the Episcopal term for Chairperson of the Vestry) was to facilitate their efforts (secure funding, move obstacles, etc.).  It also gave me the opportunity to learn; from the process, the people and the literature.  It also gave me pause to reflect on my own leadership.

The failure of several multinational corporations in the period of 2001-2003 sparked research into a new model of leadership.  There was general agreement that the leaders of these failed organizations all possessed outstanding skills and expertise, coupled with dogged determination and work habits. So what went wrong?  The question was answered with the publication of, The Search for Worthy Leadership, an academic paper first appearing in the Consulting Psychology Journal in 2008.  The paper defines “Worthy Leadership” as “the ability to guide, direct, or influence people in a way that has great merit, character, and value.”  I smiled to myself thinking, “that’s exactly what we are looking for in a new rector.”

The Worthy Leadership Model (WLM) is rooted in the belief that effective leadership embodies three elements:

In the WLM, The Character to Lead goes beyond the standard dimension of personal integrity.  In this sense, character requires leaders to be willing to hold themselves accountable.  It also requires leaders to actively acknowledge the work of others and the people around them; to recognize that, as a leader they may be “good”, but they are not better than others!  In fact, at their best they serve others.

Our year-long search has enabled us to find a new rector that brings us Worthy Leadership.  At the same time, it has fostered self-reflection and let me consider much, including my own leadership.  I’m thankful that our parish’s search has ended, but my personal search to become a better person will be never-ending.