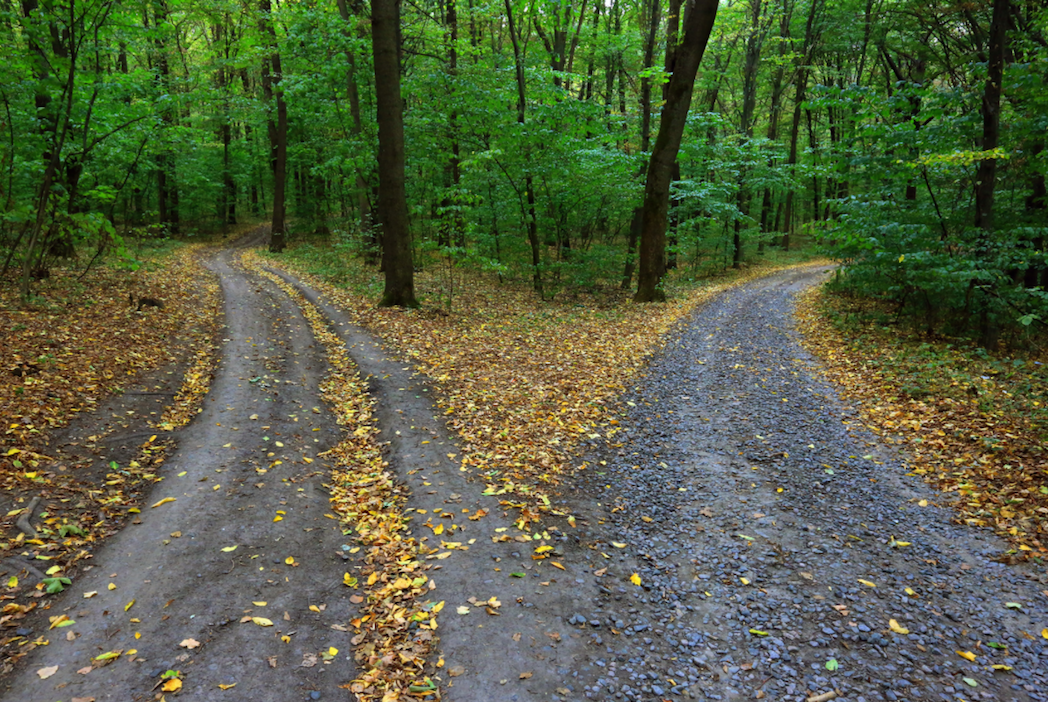 I may have shared with you that my father (Harry) was a practicing disciple of positive thinking.  He began every day by reminding my brothers and I that, “It’s another day to excel!  There are acres of diamonds waiting to be mined. You need to go get yours!”.  His attitude and approach to life were contagious.  He was the eternal optimist, and always found a way to make us smile.  Whether it was stories about his youth, “My mother took me down the corner and told me we were signing-up for summer camp.  Next thing I know I’m in the Army”, or quips in his final years, “I’m feeling great!  I woke-up, I’m taking nourishment, and your mother still loves me!  It’s another day to excel!”, you knew that he looked forward to every single day.  This week I’d like to consider some thoughts about the choices and decisions we make not only to begin our week, but others we make on a daily basis.

Have you ever wondered what the difference is between a choice and a decision?  Are they one-in-the same?  Is the decision the result of a choice that you have made?  Are the two even related?  Svetlana Whitener considers this question in her Forbes Community Voice post, The Difference Between Making a Choice And a Decision.  Whitener contends that we must consider the concepts of freedom and determinism to understand the difference.  She argues that, “Effective decision making can only flow from a place of choice free from fear and perceived limitations”.  The article uses a number of examples to help illustrate the difference between these concepts.  She concludes that the core distinction between choice and decision is that choices are connected to reasons and decisions are connected to causes.

So why do we often find leaders making bad choices or decisions?  According to John Hall, a contributor to Forbes, “The No. 1 Reason Intelligent People Make Bad Decisions” can be attributed to a failure to maintain open channels of communication and prioritizing the sharing of information.  He states, “Being a leader doesn’t mean calling all the shots yourself, It means leading by example and empowering other people to make decisions.  But what happens when the organization unintentionally promotes poor choices or decisions?

Ron Carucci, a contributor to HBR, considers this question in his December, 2016 post, “Why Ethical People Make Unethical Choices”.   Carucci contends that, “Despite good intentions, organizations set themselves up for ethical catastrophes by creating environments in which people feel forced to make choices they could never have imagined.”  As an example he cites the recent Wells Fargo debacle that cost the company $185 in fines because 5300 employees opened over a million fraudulent accounts.  He believes that the vast majority of these individuals are good people who simply got swept away by a corporate culture that promoted poor choice. Carucci identifies five ways organizations needlessly provoke good people to make unethical choicest.  These include:

• It is psychologically unsafe to speak up – “A manager’s reactions to an employee’s concerns sets the tone for whether or not people will raise future issues.  If a leader reacts with even the slightest bit of annoyance, they are signaling they don’t really want to hear concerns.”

• There is excessive pressure to reach unrealistic performance targets – “Unfettered goal setting can encourage people to make compromising choices in order to reach targets, especially if those targets seem unrealistic. Leaders may be inviting people to cheat in two ways.  They will cut corners on the way they reach a goal, or they will lie when reporting how much of the goal they actually achieved.”

• Conflicting goals provoke a sense of unfairness – Once a sense of injustice is provoked, the stage is set for compromise.  There is a direct correlation between employees’ sense of fairness and their conscious choice to sabotage the organization.

• Ethical behavior is not part of routine conversation – “It’s important to talk about the positive examples of ethical behavior, not just the bad ones.  Focusing on the positive reasons you are in business, and reinforcing the good things people do strengthens ethical choices as ‘the norm’ of the organization.”

• A positive example isn’t being set – Leaders must accept they are held to higher standards than others.  They must be extra vigilant about not just their intentions, but how it is others might interpret their behavior.

Carucci concludes with a powerful message for all organizations, “In an age of corporate mistrust, creating ethical workplaces takes more than compliance programs.  It requires ongoing intensified effort to make the highest ethical standards the norm, and ruthless intolerance of anything less.”

So, we’ve considered the difference between a choice and a decision; why leaders sometimes make bad decisions; and how the organizational culture can influence our choices.  Let’s end on a positive note and consider some choices you can make today.

“Monday mornings are the most critical time of the workweek — they set the stage for the day and week ahead.”(Jacquelyn Smith, Business Insider)  While reading this week, I came across an ad/article published by Gloveworx, a state of the art boxing studio in southern California.  Entitled, “Monday Motivation to Help You Become Unstoppable”, the article begins with a statement about an opportunity we repeatedly encounter, “The most important thing about Monday is that you can shape it however you want!”  The choice is ours, We can mourn the loss of the weekend, or we can choose to embrace the new challenges and opportunities that we will face this week.  To assist us, the author provides some motivational thoughts to guide our Monday choices.

• Monday is a Reset day:  Make a list of your “MITs” (Most Important Tasks), identify when they will be done, and post the list where you can see it.

• Never Miss Your Monday Workout:  You need to take care of you! By completing a workout or some form of exercise on Monday you accomplish a goal on the first day of the week.

• Carpe Diem:  “Mon” is actually French for “my”, so Monday is “my day”.  We have over fifty (50) opportunities each year to seize the day!  Take advantage of it!

• The Body Achieves What the Mind Believes:  Visualize success!  Envision your week in a positive light. Think about what you want to accomplish, then go out and make that vision a reality.

• You are Your Toughest Contender:  We are our own worst critics.  Benchmark your progress not by looking at others, but by looking at your own efforts and improvement.

• VINCIT QUI SE VINCIT:  “He conquers who conquers himself.”  Get outside your comfort zone, dig deep and feel the burn

Today it’s your choice.  I hope you choose to Embrace the Challenge!