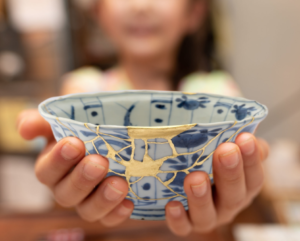 Sometimes we forget that the true beauty of something can only be revealed through its brokenness.”

“Kintsugi” is the Japanese art of repairing something that has been broken, with the understanding that the repaired object can be more beautiful because it was once flawed.  I came across a story this past week that I wanted to share with you.  Sometimes we forget that the true beauty of something can only be revealed through its brokenness.

Reiko balanced the ceramic bowl in her tiny hands as she carried it to the kitchen.  It was her mother’s favorite: a white bowl with tiny blue blossoms painstakingly painted up the sides.  Her mother only brought it out on the most special occasions.  Today was her mother’s birthday, which Reiko thought qualified as a special occasion.  The five-year-old girl had climbed the cabinets and brought out the dish, all on her own.  She couldn’t wait to fill it with her mother’s favorite treats and present it to her.  Reiko’s foot caught on the edge of the kitchen rug, and she stumbled.  The floral bowl slipped from her fingers and crashed against the tile floor.  The bowl lay in shards at her feet.  Reiko sank to her knees, gingerly picking up a broken heart-shaped piece.  She began to cry.

A warm hand rested on her shoulder.  Blurry through the tears, Reiko saw her grandfather’s wrinkled face and kind eyes staring down at her. “I tried to be so careful,” she sobbed. “I just wanted to do something special for Mama’s birthday.  Now it’s broken. I can’t fix it.” “No,” her grandfather’s voice soothed her. “But I know someone who can.  Here, help me pick up the pieces.”

Reiko and her grandfather set each piece on a tray and carried them out to the garage where her father worked on a project.  Her face paled with fear, worrying that her father would be upset that she had broken her mother’s favorite bowl.  Instead, he smiled at her and wrapped his daughter in a hug.  Then, he picked up the broken pieces and examined them. “What have we here?” “I broke Mama’s bowl,” Reiko explained with a quiver in her lip. “Well, then,” her father spoke, rolling up his sleeves. “We will fix it.  But it won’t be the same as it was before. It’ll be even better.”

Reiko watched in wonder as her father, a talented artist, mixed a gold lacquer with a few scoops of rice flour to make an adhesive.  He placed the broken shards of the bowl together with the glue.  She watched in amazement as the bowl took shape, gold gleaming from the cracks.  Her father had been right: somehow, it was more beautiful than it had been in the first place.  He told her,   “It is believed that when broken items are repaired with gold or silver like this, that the flaw becomes a unique piece of the object’s history.  And the uniqueness adds to its beauty.” “But, Papa, there’s a piece missing.”  Her fingers traced an empty hole where a heart-shaped shard was missing. “Can you fix that?”   He smiled at her, returned to his workbench and crafted a new gold heart from the dust and filled the space until it glowed. “I’ve never seen anything so beautiful!” Reiko exclaimed as her fingers clasped over her own heart. “But, won’t Mama still be mad?”

Before we end the story, think about something.  We have all been broken at some point in our lives. We have all grieved.  Whether it’s from choices we have made or circumstances beyond our control, sometimes we find ourselves so profoundly broken that we don’t know how things could ever be restored.  What is important to remember is that there is no one way.  The manner in which we seek to restore our lives will be an individual choice.  For many it will be through their faith; a belief that the One who created them will guide them as they reassemble their lives.  For others, it will be by reaching out to family and friends. Regardless of the path, what is important to remember is that being broken, being flawed, is a part of our life experience.  Now, back to our story…….

Her grandfather, who had been watching from a nearby stool, shook his head. “There will be things in our lives that break, no matter how careful we are, just like this bowl. But that doesn’t mean that they cannot be fixed. What was once broken can become something beautiful.”

Have a Beautiful Week