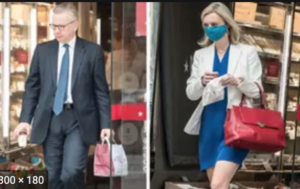 “The most powerful leadership tool you have,

Is your own personal example!”

Last week I once again came upon what has become an all too frequent scene.  A middle-aged man arguing that he has a right not to wear a face mask.  His comments were laced with the usual profanities (this serves to masculinize the argument) and concluded with the statement, “This is all political bullshit!”   While I have also witnessed women fail to wear a mask, it is becoming increasingly evident that one reason many men are avoiding COVID-19 precautions is to avoid compromising their masculinity, but in doing so, they put others at risk.

Some say it is cultural.  For years, the male image, and its associated leadership, has been analogous with taking risks and projecting a “tough guy” image.  The reason is simple, real men don’t play it safe (they don’t wear masks, fist/elbow bump, or wash their hands regularly), and according to Scientific American’s, Peter Glick, that attitude becomes a “prescription” that leads men, more than women, to take greater physical risks and suffer accidental death at much higher rates.   Additional research by Middlesex University and the Mathematical Science Research Institute in Berkeley found that men are less likely than women to wear face masks because they view the masks as embarrassing.  According to the study, men are more likely than women to agree with the idea that wearing a mask is “shameful, not cool, a sign of weakness and a stigma”.  The study also found that men have higher levels of “negative emotion” while actively wearing a mask.  Equally important, additional research has demonstrated that society treats masculinity as an earned status, one that is hard won and easily lost.  By wearing a mask????????

COVID-19 has put these behaviors in the spotlight.  According to Glick and others, some male leaders value projecting a tough guy image over promoting the common good.  Their defiance in ignoring expert warnings, coupled with their behaviors and actions, can serve to put their organizations and even nations at additional risk.  This occurs in two ways:

In addition to projecting the tough guy image, we have also discovered that wearing masks and following COVID-19 precaution protocols have been politicised to a dangerous extent.  According to a Kaiser Family Foundation survey, 70% of Democrats report regularly wearing a mask, compared with only 37% of Republicans.  Now is not the time for leaders to be worried that their COVID-19 actions align with a political platform.

Ironically, in those countries that have effectively responded to the Coronavirus we find a common denominator; Women Leaders!  Looking for examples of true leadership in a crisis?  Consider Iceland, Taiwan, Germany, New Zealand, Finland and Denmark where it is women who are stepping up and demonstrating an alternative approach; one that embraces truth, decisiveness, utilization of technology/social media, and empathy.  Want to learn more?  Take a peek at HBR’s April post,  7 Leadership Lessons Men Can Learn from Women

“Mission first, people always,”  In the US military it is more than just a saying; it’s a philosophy.  Retired Brigadier General, Douglas Satterfield shares, “ It is the leaders who are capable of balancing mission and people that are seen as the greatest leaders. These are the ones who get the job done and their people are cared for at the same time.”  Effective leadership comes from commitment to the mission at hand.  If there was ever a time for this philosophy to be embraced, it is now.