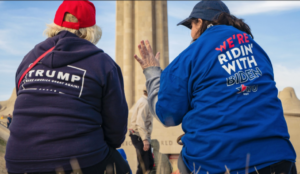 “To heal is to touch with love,
that which we previously touched with fear.”

Four years ago, following the Clinton/Trump campaigns and the election of President Donald Trump, I wrote about an experience I witnessed  a few days after the election.  It was relevant then, and I believe equally so now.

A few days following President Trump’s election,  I stopped by a local coffee shop .  It’s a small business in the community where I live.  There were about eight to ten people just sitting and discussing the outcome of the election.  This was not a planned meeting, but simply a discussion among those who happened to be grabbing a cup of coffee.   I knew some of them and met others for the first time.  It was evident that the group included Trump and Clinton supporters.  The discussion was civil and pleasant, but it became evident that many on both sides were troubled over the election outcome and where the country will go from here.  After 20 minutes or so the conversation ended with smiles and handshakes.  What struck me was the comment of an elderly woman as she left.  She turned and said,  “Thanks!  I just needed somebody to listen.  Have faith everyone, we’ll get through this together.  We always have.” With that she was gone.

That was four years ago.  Over the next few days, I imagine you may find yourself engaged in a similar discussion regarding this year’s election.  When you do engage in that conversation, I encourage you to think about the importance of empathy; the capacity to understand or feel what another person is experiencing from within their frame of reference.  Essentially empathy is having the ability to place oneself in another’s position.  Why is this so important?  Because it is only through empathy that our healing can begin, and the good news is we each have the capacity to be a part of that process.

“Have faith everyone, we’ll get through this together.  We always have.”