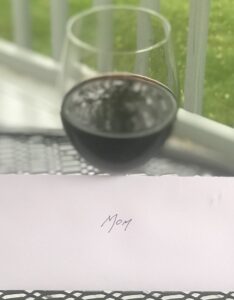 Life doesn’t come with a manual,
it comes with a mother!

It’s been almost six years since she left this life to be reunited with her Harry.  I imagine they spend their days playing tennis and getting together with friends.  On occasion she joins my Dad and me as we sit on the deck late into the night and enjoy a bourbon.  Mom prefers a red cabernet, and like him, she simply listens as I share my thoughts, disappointments and aspirations.  It must be frustrating as hell for her, as she was never one to hold back her thoughts; filters were for others.  She was direct, to the point, and if you had a problem with it, too bad!

She was a stay-at-home Mom, like so many of her generation, but also very competitive; a trait passed on to her three boys.  It was later in life that she became interested in tennis.  The interest became a passion, and soon she was playing in leagues year round.  It wasn’t uncommon for her to play a match in the morning and then meet a friend to play a second match in the afternoon or early evening.  She played singles and doubles into her eighties.  The pursuit didn’t matter, she was all-in, be it on the tennis court, singing in the church choir or pursuing her volunteer work.  She made a 100% commitment to any task undertaken and expected no less from us.  Half-assed efforts were unacceptable, if you were going to do something, you did it right; the first time!

Meticulous might best describe her approach to life and everything else she did.  Mom was a planner and organizer and she did so with pride.  Be it coordinating events for her beloved Devon Horse Show, a trip to the shore, or simply cleaning the silverware, there was a methodology to be followed that yielded best results.  In her eyes, it wasn’t just what you did, it was how well you did it; be it washing the dishes, making a bed or cutting the lawn.  She believed the habits we developed early in life would later contribute to our work ethic and performance expectations.  Had she run a company, an employment notice in the classifieds would have read, “Help Wanted; Slackers Need Not Apply”

Manners and rituals were important, and her etiquette lessons reflected the era in which we lived.  You cleaned-up before sitting down to dinner, the food might be on the table, but no one touched it until Mom was seated (yes, one of us did hold the chair for her).  We said a blessing before eating, conversed during dinner and were corrected by her when we interrupted someone, or spoke with a mouth full of food.  Words and phrases such as please, thank-you and “May I be excused?” became a part of our vocabulary and life.  We learned early that you hold the door for ladies and others, offer assistance when it appears that someone could use a helping hand, and rise when a lady enters the room.  Simply put, she taught us to be courteous; lessons that still have a place in a gender-neutral world.

Perhaps the most important lesson I learned was that of gratitude.  Mom was the queen of the thank-you note.  The importance of the action or event did not matter;  if someone had done something nice for you, it warranted a handwritten note.  She maintained that she was simply being appreciative, but I believe it was also somewhat cathartic for her; much like this piece is for me.

When she died six years ago, she was 92 years old and we were not on the best of terms.  Dad had died four years earlier and she missed him dearly.  Her closest friends from tennis, Devon and church had passed on or were now living in nursing homes.  Mom still lived in the house she and my father had purchased so they could be near me, and while I did try to visit or at least check in daily, she was lonely.  She vehemently fought moving into a retirement center or community as, “there’s nobody there but old people!”  When I reminded her she was also old, well, let’s just say a few, heated words were exchanged.

Today is Mothers’ Day and I expect she will stop by this evening with Harry to spend a few minutes with me before moving on to see my brothers.  I will pour her a glass of wine, and it will sit there as I share thoughts and thank her for all she did for us.  The lessons were learned and this is my thank-you note…Happy Mothers Day Mom!