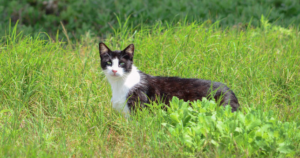 “The impediment to action advances action.
What stands in the way, becomes the way.”

Every so often I will catch a glimpse of him as he emerges from the thicket that borders a stream running near the back of my property.  This morning he carried his hunt with him; it appeared to be a mouse or a vole that had unfortunately crossed his path.  Checkers, as I’ve nicknamed him, is a black and white feral cat that has made our neighborhood his home.  He’s not one to warm-up to people.  In fact, he high tails it for the thicket the moment he sees me.  In the winter I’ve watched him move quickly across the snow covered yards, or scamper across the road, but it is in summer that he is more leisurely about his movements.  Compared to the typical housecat it would seem that Checkers has a challenging life; no one to feed him, no lap to snuggle in and constant exposure to the elements.  Some would say that he is a survivor, I disagree.  I think he has learned to continuously adapt to changes thrown his way, and as a result he thrives.

With humans, the fundamental difference between surviving and thriving is to be found in an individual’s mindset.  Surviving implies a continuation of our lives or existence; it becomes a mindset of doing what is necessary to exist one more day.   The survival goal is a continuation of what has been; something that is almost a doomsday prophecy in an ever-changing world.  On the other hand, thriving implies that one is developing, growing and prospering.  The difference between these mindsets is relatively straightforward; surviving is doing what is necessary to continue existence, thriving is creating something better than what currently exists.  The challenge is to be found in developing and embracing a thrivalist mindset.

Some think of thriving as a product of good times, and it is.  But good times are the product of thoughts and actions that when brought together enable dreams and aspirations to be realized.  Simply put, thriving begins as a mindset that embraces innovation, courage, perseverance and discipline.  At one time in American history we called it the pioneer spirit, today it can be referred to as a thrivalist mindset, and it begins with an understanding that there is one thing that has not changed over time – there will always be circumstances beyond our control that will continually challenge us.

Those who thrive recognize that the world will constantly test us.  The fundamental question comes down to our ability to deal with the unanticipated obstacles that confront us.  The circumstances that make us ask:  Am I worthy?  Can I get past, through or around this obstacle?  Will I rise and show what I’m made of?  The thrivalist mindset not only answers the affirmative in all three, but thrives and rallies at every such challenge.  Thrivalists recognize and embrace a very important lesson: Better to be challenged and failed, than to have never faced adversity.  The thrivalist mindset enables us to learn from failure and apply those lessons as we move forward seeking a better future.

Over the course of the next week I will sit on my deck and catch that occasional glimpse of Checkers going about his life; one filled with daily obstacles.  As I sit and watch, I will be cognizant that, at this moment, my life is good, but there are challenges yet to be encountered that will challenge me to thrive and create a better life for my family and others.  Bring it on!