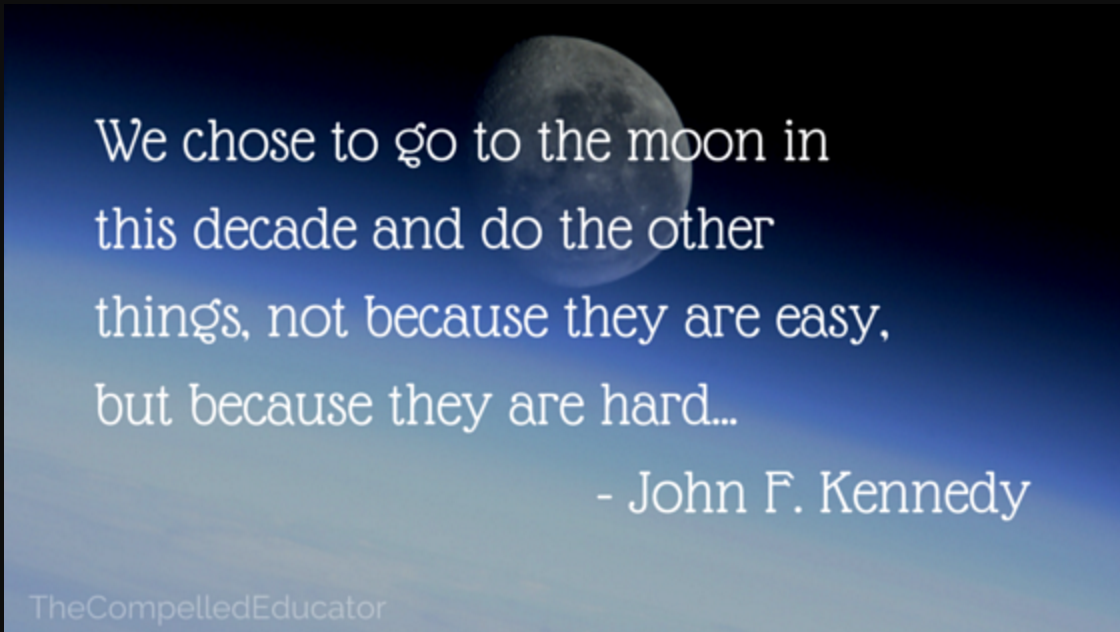 I’m an optimist!  I always look for the silver lining, I have positive expectations when I begin a project, I anticipate success, I embrace “ Moonshot Thinking”.  Imagine my surprise when I came to the realization that part of “Moonshot Thinking” is planning for failure.  In fact, my readings this week considered using negative or inversion thinking as a means of attaining positive results. Let me share with you.

James Clear’s post, Inversion:  The Crucial Thinking Skill Nobody Ever Taught You, introduces the reader to what the author terms as “ Inversion Theory” (i.e. planning from an “opposite perspective”).  He opens by noting the ideas of the Stoic philosophers and their practice of “Premeditation of Evils”  Essentially this group believed that by imagining the worse-case scenarios they could overcome their fear of negative experience, hence enabling better planning to prevent the scenario.  He states, “ You can learn just as much from identifying what doesn’t work as you can from spotting what does. What are the mistakes, errors, and flubs that you want to avoid? Inversion is not about finding good advice, but rather about finding anti-advice. It teaches you what to avoid.”  Clear provides solid examples of the use of Inversion Theory as it relates to Project Management, Productivity and even Personal Relationships.  He concludes with three important ideas:

• Inversion prevents you from making up your mind after your first conclusion. It is a way to counteract the gravitational pull of confirmation bias.

• Inversion allows you to step outside your normal patterns of thought and see situations from a different angle.

• and the one I like best, “Whatever problem you are facing, always consider the opposite side of things.”

Lauren Dixon, an associate editor at Talent Economy , considers the use of negative thinking as a means of helping organizations prepare for possible failures and thus enhance the possibility of long-term success.  Her post, “Why Leaders Should Balance Positive, Negative Thinking begins with an example of the use of negative thinking taken from the planning for the 2010 Winter Olympics held in Vancouver. Do you remember  that there was very little snow that winter?  The skiing went off without a hitch.  Why?   Because of a contingency plan developed one year earlier that considered things from a negative perspective.  Dixon’s interviews with two CEO’s and a University researcher reveal some other key ideas including:

• Negative thinking helps people to imagine unexpected outcomes and then plan ahead.

• It’s OK to be excited and passionate about outcomes, but when presented with obstacles, it’s important to unwind from positive thoughts and get back to the center of the issue at hand.

• Teams within companies should have that balance internally, “Negativity is the exercise of a team role, which is a challenger role or a mirror to show people what it looks like that they’re bringing forward and what the possibilities are.

• Negative thinking should not completely replace positive thinking in business culture. Neither one is appropriate by itself.

It’s a good quick read.  I know you will enjoy it.

Earlier I shared my belief in “Moonshot Thinking”  Coined by Google X, the term reflects the words of JFK whose 1962 speech, We Choose to Go to the Moon inspired a generation as we heard him share his dream of putting a man on the moon by the end of the decade.  It’s important to note that not only did Kennedy have a dream, but he coupled it with strategies to make that dream a reality.  In his TED video, The Unexpected Benefits of Celebrating Failure  Astro Teller, former head of Google X shares how his company uses Kennedy’s approach (dream big and couple with strategy) and connects it to an equally important approach embraced by GoogleX, “ Make it safe to fail”.  He shares the following as he concludes his talk.  “We believe in dreams at the moonshot factory. But enthusiastic skepticism is not the enemy of boundless optimism.  It’s optimism’s perfect partner.  It unlocks the potential in every idea.